The Adflex payment API is a comprehensive set of RESTful based web services that allow you to implement card payment processing into your applications. Our APIs are delivered through seamless cloud integration to cover a wide range of payment processing methods and security measures such as tokenization, strong customer authentication (SCA) and card on file (CoF). We also cover the full spectrum of card processing environments, including customer-not-present, customer present, eCommerce, B2B level 3 and travel enhanced data.

APIs are grouped into two types, Core and PayPage.

Core - A collection of foundation layer payment APIs not bound by any session state mechanism.

Paypage - A session-based API set designed to satisfy PCI DSS compliance. Works in conjunction with a JavaScript widget to capture the card outside of your system and inside our PCI compliant system.

Both API groups can be used together in creating a PCI compliant hybrid payment process. For example, capturing and tokenizing a card using the PayPage API followed by authorising and settlement using the Core API

Adflex is a fully PCI DSS compliant payment processor at the highest level.

To minimise your PCI burden and achieve PCI SAQ-A compliance, use our Paypage solution.

If you intend to capture and store the card details yourself, you can use our Core API. However this would bring you into scope of PCI-DSS SAQ A-EP or PCI DSS SAQ D compliance.

The Adflex RESTful API uses a JSON format for both requests and responses. HTTP works as a request-response protocol between the client and server. The following table details the HTTP methods that are used in conjunction with the resource end points detailed in the API documentation

Changes to the API contract

If we have to reluctantly implement any backwards-incompatible changes (those that require you to make a change to your code), a new version of the API is released, and URI versioned, e.g. host/v2/. The original version is maintained until we issue an end of life for that version.

We do try very hard to keep any changes to an “additive” change, that is where the version does not change, and changes can be ignored until you need them. We strongly recommend that you keep your API implementation up to date with the latest, as the payment process could change to implement new security and regulatory changes that are required from time to time.

The current major version of Adflex API is v2.

The current full version of the API can be queried as follows;

In order to get you up and running quickly, we recommend that you use a free tool called Postman. This allows you to execute API calls from a collection of predefined method templates.

We have made available a range of test cards in order for you to test a wide range of processing scenarios, including Authorised, declined and Errored of Debit, Credit and B2B purchasing cards.

In all the above cases do not use any numbers in the address/postcode fields as this will result in unexpected results.

When we make backwards-incompatible changes (requires you to make a change), we release a new version of the API. The current version of Adflex API documentation is v2.0.27.

To ensure we do not break your code, it is essential that you support the following compatible changes.

With the above mentioned compatible changes, We will not suddenly stop supporting older versions of API. But when you try to use the latest version, we would advice you to make full use of updated changes in the new version.

The changelog contains all major changes that made in each version release. The log will be in reverse chronological order.

Once registered you will receive the following;

We uses a robust authentication methodology. It starts with a secret key that is created by Adflex and issued to the merchant at the point of account set up. The main purpose of this key is to sign the authentication token for each API call. This secret key has to be treated as secret, securely encrypted on your system and never transmitted.

The secret key is accompanied by an accessKey. This is used in the header of the REST message along with the JWT authentication token.

Adflex uses JWT authentication mechanism with signatured keys in order to verify the requests. There are many libraries supporting every language which is available at https://jwt.io/

Create a body for JWT token, all shown elements are mandatory.

Description: jti: Unique GUID per call. aud: The fully qualified resource endpoint the JWT will be used for. For example: "https://api-test.adflex.co.uk/v2/transactions/authorisation". iss: Issuer, must be set to "Adflex. iat: Issued time, use NumericDate format as per RFC 7519.

You need to get the secret key in bytes using UTF-8; encoding secKey.getBytes("UTF-8") 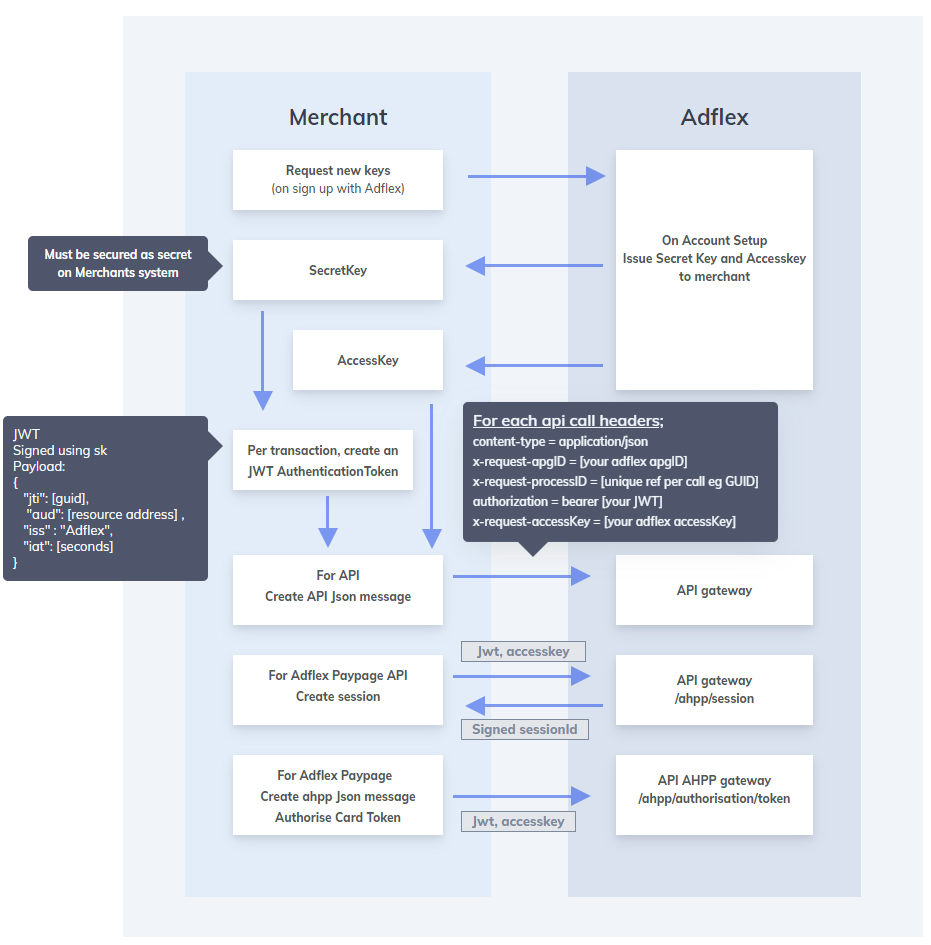 When you make a payment by Credit or Debit card, you fire off a complex sequence of operations, just a few seconds later the payment will be Authorised or Declined. But in those few seconds, a whole series of security checks, communications and analysis of the trustworthiness of the transaction will be taken place. Until the payment is actually in your bank, the sale will not be completed.

It all happens quietly behind the scenes. You may see that it is fast approval and rapid payment. A customer may dispute a payment, leading to a chargeback, for example. That is when a broad understanding of what is going on can help you.

In payment processing, the full process to complete a card payment usually takes about three working days, during which it passes through important stages eg. authorisation, clearing and settlement.

Card processing is typically broken down into three phases.

Authentication - Where the customer is using their card directly, eg. eCommerce. This step will attempt to authenticate the user is the real card owner.

Authorisation - The amount to charge is ring-fenced on the card as the potential charge to be made to the card on the settlement. There is no transfer of funds between the cardholder and the merchant but will reduce the spending limit on the card by the transaction amount.

Settlement - This will execute the transfer of authorised funds between the cardholder to the merchant.

AVS is a Cardholder not Present (CNP) fraud detection process based on passing the address information captured during the checkout process directly to the cardholders issuing bank for checking. Once checked the issuer then returns a code indicating the certainty of the address match. This code is then passed through our rules-based checking system to contribute to a transaction acceptance score. Please note that AVS does not work so well for corporate cards where the card may be registered at a different address to that of the cardholder.

CSC also referred to CVC and CVV is a three to four-digit security code that should only be known to the cardholder. This code is requested during the checkout process and is passed over to the cardholders issuing bank for checking. The response is then passed through our rules-based checking system to contribute to a transaction acceptance score. A failed CSC transaction should never be accepted.

There are several ways to deal with a delayed shipment and charge model.
Here are a few options:


Option 1 : To reserve, but not take the funds from the card (ring-fence) the charge value at the point of order entry.

The net benefit for the merchant is that there is a high probability of receiving the ring-fenced funds on dispatch and settle.

If for any reason the dispatch phase is not run (eg order cancelled, or stock not available) then the impact on the card holder is that their cards spend limit will be reduced for a short period of time whilst the original authOnly naturally expires. This is not a limitation of Adflex, but the way the card authorise / settle processes and handled in the UK.

Note on the use of /transactions/reversal. The reversal process is designed to reverse (remove the reserved amount on the card) if called very shortly (typically hours) after the execution of an "authOnly" transaction. Adflex is currently working with specific acquirers on supporting the "enhanced reversals" process which will work on "authOnly" transactions greater than a few hours old. This is expected to be introduced within the next few months, once the initial PSD2 SCA and Credentials on File compliance work has been fully implemented.

Option 2 : Authenticate and tokenise the card, followed by a zero value authorisation only.

The impact on the cardholder is that their card spend limit will not be reduced for the period prior to the dispatch of the goods and that the funds will only be taken once the goods are dispatched.

The impact on the merchant is a probability that the card has insufficient funds to pay for the shipment.

How to manage Refunds

For obvious reasons refunds are not allowed to be a card holder initiated option.
Refunds are managed in the merchant environment and are executed using a call to /v2/transactions/authorisation/token with the property "type" of "Refund".

The Settlement is the process of executing the authorised payment charge from the card to the merchant.


There are two fundamental models:

Authorisation (processMode=AuthAndSettle) followed by an Adflex invoked automatic settlement at the end of day.

Regarding certainty of getting paid, if you call /ahpp/authorisation/token and get a response "statusCode" = "Authorised" and an "authCode" number then the transaction will be honoured and paid.

Here are a few examples where there may be a small risk of not getting paid:

An extended time (typically > 10 days) between authorising and settling the card.

The cardholder initiates a chargeback, where the cardholder would is reimbursed if there is suspect fraud and the proper authentication steps not done.